Whoops, Trump did it again — the same blackmail scheme that got him impeached 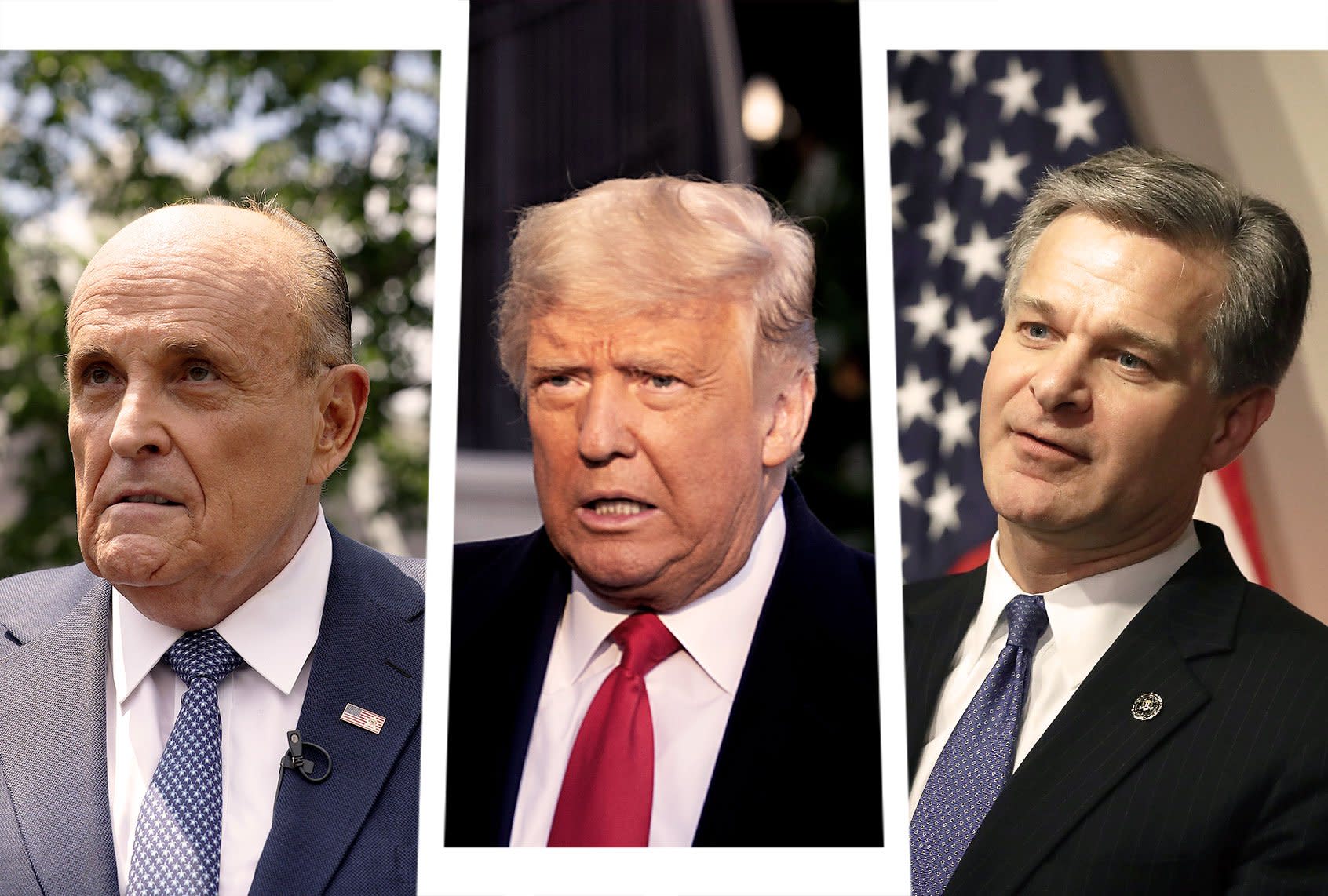 Whoops, Trump did it again — the same blackmail scheme that got him impeached

Trump was impeached for blackmailing Ukraine's president. Now he's trying the same scheme on his own FBI director

"Back thousands of years ago, in February of 2020, Sen. Susan Collins of Maine, a "moderate" Republican, justified her vote to acquit Donald Trump at his impeachment trial — despite the mountains of evidence of guilt — by claiming that Trump had learned his lesson.

"I believe that the president has learned from this case," Collins told CBS news anchor Norah O'Donnell at the time. "The president has been impeached — that's a pretty big lesson."

That excuse was preposterous at the time, making it sound like Trump was a child who had his hand in the cookie jar, not a 73-year-old man caught abusing his powers of office to blackmail the Ukrainian president into propping up conspiracy theories about Joe Biden. But it was also hilariously predictable that Trump, who is incapable of learning or growing as a person, would absorb any moral lessons from being impeached.
Trump didn't learn anything. In fact, he's only escalated the very same botched conspiracy that got him impeached, only this time around he's abusing his power on the home front, instead of in a distant nation most Americans couldn't find on a map.

Truth told, Trump demonstrated his failure to learn within days of his acquittal, first by bragging about it and then pivoting to lying about the Democrats. Since then, he's gone right back to abusing his power to fabricate lies about his opponent. He and former New York mayor Rudy Giuliani — along with Giuliani's buddy Andrii Derkach, a Ukrainian legislator with ties to Russian intelligence — eventually returned to the very scheme that got Trump impeached in the first place: am attempt to counterfeit evidence that Hunter Biden, Joe Biden's son, had somehow dragged his father into a corrupt scheme. It's a claim with literally no evidence to support it, no matter how much Trump and Giuliani repeat the accusation.

On Wednesday evening, Devlin Barrett and Josh Dawsey of the Washington Post reported that Trump has threatened to fire FBI Director Christopher Wray — who, lest we forget, was appointed by Trump after the firing of James Comey — unless Wray announces a phony investigation into Biden that Trump can use as last-minute ammunition in the presidential campaign.

"Trump wants official action similar to the announcement made 11 days before the last presidential election by then-FBI Director James B. Comey," Barrett and Dawsey write, referring to Comey's infamous announcement that "he had reopened an investigation into [Hillary] Clinton's use of a private email server while she was secretary of state after potential new evidence had been discovered."

That investigation resulted in no damning information about Clinton, which was entirely predictable. Clinton had been thoroughly investigated for years without a speck of meaningful dirt turned up on her. But that announcement did help turn an election Clinton should have won to Trump's favor: It caused a surge of undecided voters to break for Trump at the last minute, allowing him to win several important swing states by razor-thin margins.

So there's one thing Trump was capable of learning: The value of fake scandals to distract from serious issues, such as his own corruption and incompetence. And he's hoping for a repeat, which is why he's pressuring Wray to pull a Comey against Biden.

But in doing so — and in "considering" whether to fire Wray if he doesn't — Trump is doing the exact same thing that got him impeached: Pressuring a government official to announce a phony investigation into his opponent, and threatening to use the powers of his office to punish that person if they don't comply. This time Trump is targeting a Senate-confirmed official who leads a federal law enforcement agency rather than a foreign leader.

For those who have grown hazy on the details of Trump's impeachment — which is understandable, since there have been dozens, if not hundreds, of Trump-caused crises since then — a quick recap: In the summer of 2019, Trump called the newly elected president of Ukraine, Volodymyr Zelensky, and told him that the U.S. would withhold military aid (which had been authorized by Congress) unless Zelensky did Trump "a favor." That favor was to announce an "investigation" into Biden aimed at propping up the convoluted conspiracy theory about Hunter Biden, a Ukrainian gas company and a fired Ukrainian prosecutor that Giuliani and Trump were trying to push into the mainstream media.

Zelensky clearly felt uneasy participating in a scheme to smear an innocent man's reputation, but Ukraine desperately needed the military aid to fight Russian aggression. Luckily for Zelensky, he was spared from this blackmail scheme by a whistleblower and Trump's eventual impeachment for abusing his office.

Now Trump is doing to Wray what he did to Zelensky. The only difference is that Trump's leverage in this case is limited: He can dismiss the FBI director at any time, having already done so once, but that's about it. With Zelensky, Trump's threats carried a lot more weight.

Either way, the basic story is the same: Trump is demanding that a government official abuse his powers and launch a completely phony investigation based on made-up charges, for Trump's political benefit. In fact, Trump has reportedly made similar threats about Attorney General Bill Barr, because the Justice Department's bogus special-counsel investigation of the Russia investigation evidently hasn't turned up anything Trump can use to bolster his conspiracy theories about the Democrats. (If Barr, the most dogged and ruthless of Trump's sycophants, is in trouble, things in the White House are getting really bad.)

There's a word for all this: Blackmail.

Unfortunately, the media coverage about the attacks on Wray (and on Barr) or about the latest ridiculous wrinkles in Rudy Giuliani's harebrained schemes all too often fails to provide the necessary context. It doesn't remind readers that none of this is new, and that in fact all these developments are part of the same conspiracy that got Trump impeached. The Washington Post article on the threats against Wray fails to use the word "impeachment" or to mention that Trump is treating Wray exactly as he treated Zelensky. And although mainstream media has emphasized the most important aspects of Giuliani's efforts to smear Biden — that Giuliani is not credible and is believed by U.S. intelligence to be spreading Russian disinformation — most articles don't explain that Giuliani is still working the same plot that got his celebrity client (quite likely his only client) impeached.

It's as if G. Gordon Liddy kept burglarizing various Democratic offices after the Watergate break-in, but the reporting on his later crimes failed to mention the first one. Our national situation is an ongoing catastrophe, no doubt. But is it really too much to expect journalists to explain that Trump keeps on doing the very thing he was impeached for doing?

Either way, the situation shows that Trump, despite all his chaotic crazy-uncle ranting, doesn't actually have a lot of tricks in his bag. The only thing he knows how to do is cheat — and the only way he knows how to cheat is by threatening and blackmailing other people to do the work for him. Without that, he's got nothing. "
Reactions: HuskerCK, philosophusker, lifer56 and 3 others

The President is not a good man. He is a bad person and he does bad things. People who vote for him enable him. It's a shame he is going to win reelection.
Reactions: Gonzo3705 and bldhuskerred

He wasn’t impeached on anything relevant or factual!!!

that’s why It never made it past Democrat hack house. It wa dropped and by the way if you want to know where your Democrats were when Trump was shutting down in China and Covid they were busy trying to impeach Trump and telling everybody he was crazy for shutting down China and he’s a xenophobe racist against China I suppose he’s a euro fault too because he shut them down your people make no sense on the left all you have is hackery nevertruth only fake news every damn day of our lives!!!

we just endured it for four years why are you believing anything that comes out of your media??

Name one thing you’ve gotten right what Trump gotcha prove that there was evidence against him that you said there was it’s all hearsay and rumors .... that’s all you have And it’s a disgrace your party has basically been my home and devolved into junior high Goss up if not elementary school. In the whiny babies are all over the place as evidence waaaa I lose I need to change the rules Waaa I lost Trump sucks he’s mean

because you hate the guy just admit it just admit him you want to ask him you don’t care how but it’s never going to be on evidence if you had something real it would’ve been done by now and Republicans would’ve also been on board because plenty of them hate him
Reactions: HuskerCK, Oldschool1964 and countrybob

One things for sure we’ve never had anybody in peace with less found against him we’ve never had more investigations nonstop 3 to 4 independent investigations you found nothing you think he would quit but you won’t because you’re whiny baby cry berry bees who care only about power not the people
Reactions: zzt, Oldschool1964 and countrybob

I feel sorry for you @jbt25. I bet you have got scammed out of all your money by foreign scammers posing as IRS Agents. You are just so clueless.

I have more respect for orange lemmings that at least admit he's a POS but still vote for him than those of your ilk that think after all he's done that he is still the annointed one.
Reactions: philosophusker, cavalot and scopeandtime

The Bay or the Sierras

In before "both sides do it" guy tries to draw equivalency.
Reactions: brdore, bldhuskerred, philosophusker and 2 others
I

Damn near had me until I saw Salon
Reactions: HuskerCK

jbt25 said:
Impeachment is usually an almost always political number one but even under Clinton there was DNA evidence against him that he lied doesn’t matter though you guys have no evidence and it’s usually a political impeachment especially from your side you’ve got zero

One things for sure we’ve never had anybody in peace with less found against him we’ve never had more investigations nonstop 3 to 4 independent investigations you found nothing you think he would quit but you won’t because you’re whiny baby cry berry bees who care only about power not the people
Click to expand...

That's because we have never had a president as corrupt as Donald J Trump. Any other day and age and both parties would have tossed his fat ass out of office, but we as a country are so polluted by the talking heads we can't see the forest for the trees.

Your denial of the trump corruption is case in point. Continue staring at your Limbaugh poster and leave the thinking to people who aren't blinded by an orange light.
Reactions: HuskerCK, brdore, bldhuskerred and 1 other person
B

CNN and other corrupt media have really screwed up this country with all the lies and hate they broadcast each and every minute of each and every day!

Fuchs ! America is a dream that has failed!
Reactions: HuskerCK
You must log in or register to reply here.

If Trump Had Been a Pro Mask and Lockdown Tyrant...

Why Trump is correct

Trump Plan Was To Withdraw Americans