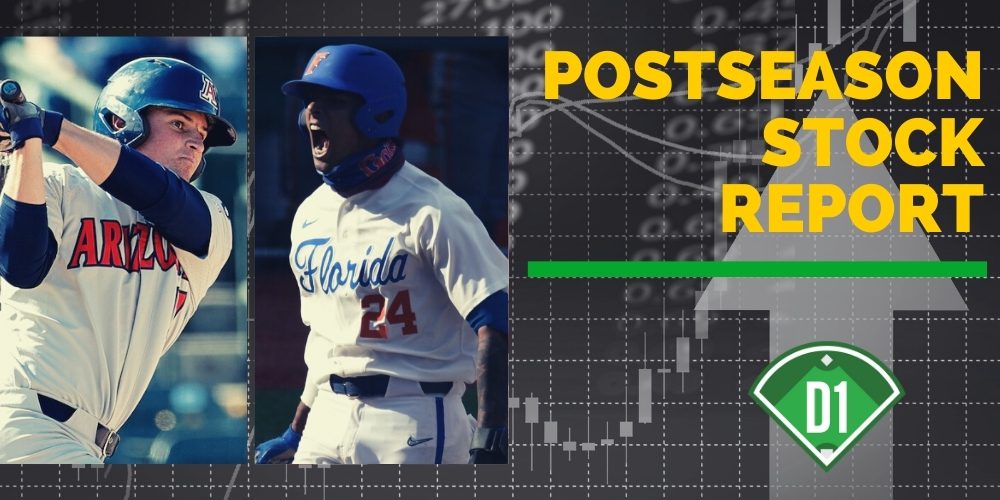 Arizona and Florida are among the teams that helped their stock over the last week, moving up in our latest projection for the top 16 seeds. Aaron Fitt breaks down the races for top-eight seeds, hosts and at-large spots.

This time of year, a hefty majority of all questions submitted in our weekly college chat, as well as those sent via e-mail or Twitter, center around the battle for postseason positioning. Our readers want to know how the races for national seeds, host sites and at-large bids are shaping up—so it’s time for our weekly Stock Report feature. Every Wednesday, we’ll examine how the postseason picture has shifted over the previous week. This analysis is intended to complement our weekly NCAA tournament field of 64 projection, which was put together in a conference call with Kendall Rogers, Mark Etheridge and me on Monday night.

Below, we’ll look at who’s in, who’s out, who’s on the bubble for at-large spots, hosts and national seeds. This discussion is weighted more toward performance to date and remaining schedule than projection based on talent, but it’s also not intended to show exactly what the field would look like if the season ended today. We’re still looking ahead, and we’re still taking talent and expected performance down the stretch into consideration when putting together our forecasts.

During this discussion, we will reference the RPI Rankings through Tuesday’s games, even though this field was constructed on Monday based on RPI data through Sunday’s games. And we’ll make use of records against the top 25, 50 or 100 in the RPI using the D1Baseball Nitty Gritty Report (also through Tuesday’s action).

We’ll get to at-large chances in a bit, but let’s start with a look at which teams are on track to earn national seeds and which are on track to host regionals through the first 11 weeks of the season:

Nebraska had moved into a host spot last week, and then it got swept at home by Rutgers, dropping it right back out of the top 16. We are starting to get the impression that there won’t be enough separation between the top Big Ten team and everybody else to warrant a host spot in that conference this year. Indiana is currently in the catbird seat at 20-9, but Michigan (21-11) and Nebraska (20-10) are right there with the Hoosiers, and if nobody can pull away this weekend, all of them could get left out of the top 20 pool.

On the Bubble (In): Iowa

On the Bubble (Out): Rutgers, Maryland, Ohio State

No change from last week. Typical caveat here: the Big Ten is only playing conference games, so its useless to compare RPIs to teams from other conferences or to the typical RPI benchmarks necessary for at-large bids. All that matters here are the records and head-to-head results. There are currently seven teams with winning records in the league, and all of them are in the hunt, but this will just have to play itself out. For now, we've got the top four teams in the standings in our field, with Indiana (20-9), Michigan (21-11) and Nebraska (20-10) leading the way. Iowa and Maryland are tied at 19-13, but the Hawkeyes get the nod over the Terrapins by virtue of winning three of the four meetings between the teams. Maryland's fortunes will ultimately be determined over the final two weekends, with series at Michigan and vs. Indiana. Right now, the Terps are a little short of quality wins against the top teams in the conference; their best series win is against 17-14 Ohio State. Maryland has also split a four-game set against Rutgers, which has climbed a tick ahead of the Terps in our pecking order after winning back-to-back road series at Michigan and Nebraska. Rutgers is 17-13 in the league, which puts its squarely on the bubble, but it is doing a nice job moving on up in the standings after a slow start. This weekend offers yet another crucial opportunity for Rutgers to pad its resume, with two games against Nebraska and two against Indiana in Piscataway. A split in those four games might be enough to land the Knights on the right side of the bubble, and winning three of the four would certainly do it.

Got no problem with any of that.
Reactions: donahues17
You must log in or register to reply here.

Husker Baseball Board May 31, 2021
sklarbodds

Husker Baseball Board May 5, 2021
RobsterMobster