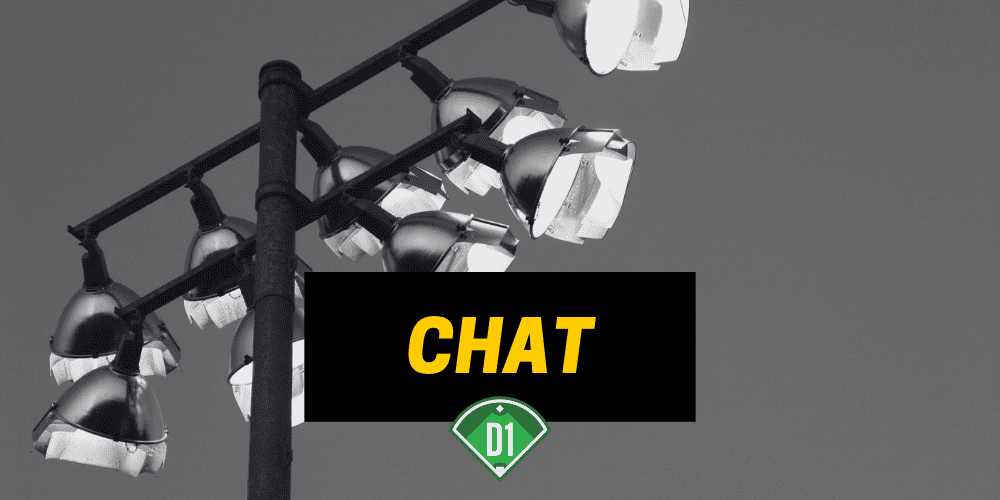 It was a huge final weekend of the regular season and now we press on to conference tourneys. Aaron and Kendall take your questions.

Questions related to Nebraska and Big Ten baseball copied below

TOAST: Serious question. At this point in the season, are your rankings based on their postseason position for seeding, or based on the actual 25 best teams in the country, in that order?

Aaron Fitt: They're really not based on postseason seeding, as you will see if you compare the projections with the Top 25. Just an obvious example, we've got Texas No. 2 in the rankings but still projected as he No. 3 national seed behind Vandy (although personally I argued this week that Texas should be the No. 2 national seed now that it has won the Big 12 regular season title). Anyway -- there are still certain "poll dynamics" at work in the Top 25 that are not factors in our postseason projections.

Krey: Other than game #1 in the Regionals, what is the advantage of being a 2-seed over a 3-seed?

Aaron Fitt: Well that's it, it's just a matter of getting a more favorable matchup in the first game, theoretically at least. And also being the home team in that matchup.

Jack Krauel: Who are the four pre-determined host sites that are not hosting in your opinion as of today?

Kendall Rogers: Jack -- I think Pittsburgh is very much off the board. No shot they host at this point. I would have Southern Miss and Louisiana Tech out but within striking distance, South Carolina very close, and Charlotte as the leader......for now. C-USA tourney and South Carolina's road in Hoover will matter here, IMO.

Mike: Thoughts on Nebraska potentially getting a one seed?

Kendall Rogers: I don't think the Huskers get a one-seed at this point. I think if you see someone traveling as a one-seed, it would be someone like North Carolina State should it roll through the ACC Tournament. Nebraska, for me, will be a two-seed, and an incredibly difficult two-seed to face. My hope is that the Huskers get sent to one of the "easier" regionals.

Brandon: How about the job Will Bolt is doing in Nebraska? He may have finally woken a sleeping giant in Lincoln, as I've always thought the Huskers had everything in place to be the premier Big Ten program. That team will be trouble wherever they end up going, though they seemed destined to go play against former coach Dave Van Horn in the Fayetteville regional. What are the odds of the Huskers somehow finding a way to beat the #1 team in the nation on their own turf?

Kendall Rogers: Brandon -- Will and his staff have done a great job. Will was a terrific, hard-nosed player, and he learned under two excellent coaches in Dave Van Horn and Rob Childress. So, it's no surprise to me that he was ready for this job. Did I expect NU to win the Big Ten this year? Not really. I'm happy for Will and his staff, especially Lance, whom I actually went to high school with. As for the regional pairings, I don't think the Huskers end up at the No. 1 national seed right now, so rest easy!

FittsMagic: More RPI talk: is there a chance that RPI only gets used when the committee wants to provide reason for certain choices and ignore it in other sports?

Aaron Fitt: Feels about right! Nobody cherry-picks metrics to fit their narrative like the Division I Baseball Committee!

Guest: Chance for Nebraska being a 1-seed in a remote Regional? Maybe in the Zags regional, or say Pittsburgh?

Aaron Fitt: Kendall kinda dismissed the chances for this earlier, but I'm not so sure. Nebraska's record in the Big Ten is really loud for me; it's a .725 winning percentage and a 3.5 game lead in the standings. What else can they really do? I think if they win that last series against Michigan, the Huskers have a real chance to be a 1-seed on the road (in Spokane or maybe Charlotte? But not Pitt. I don't think Pitt gets a home regional regardless.)

Kendall Rogers: I actually agree with Aaron on the idea of sending NU somewhere as a one seed -- just don't think the committee would do it. If Nebraska wins that Michigan series, I hope I'm wrong.
Last edited: May 24, 2021
Reactions: sklarbodds

Keegan (Nebraska): Do the Cornhuskers have a shot at playing their way into being a road 1-seed? How does their resume stack up against some of the teams still on the hosting bubble?

Teddy Cahill: I don't think so. The Big Ten champion doesn't typically host a regional -- right or wrong, that's usually how it goes. So, in this year when Nebraska and the rest of the Big Ten teams haven't been able to test themselves against other competition, why would it be any different? It's hard for me to craft an argument for Nebraska (or any other Big Ten team, had another team won the title) to host that isn't based on geography and the idea of growing the game. If that's true, then I certainly can't craft an argument for them to be a traveling No. 1 seed.

NCAA Fan (Omaha): Will Omaha be full capacity this year?

There is a chance, specifically if we really take care of business vs Mich...but it's a long shot.

Even though I'd be willing to bet we end up @ Arky (because the committee prob will not show any favors to the B1G and they prob shouldn't), I think our best hope is that the committee rewards us with a easier regional.
Reactions: Alum-Ni On the Mark: Sizing the Bubble • D1Baseball

How's life on the bubble? Mark looks at safe teams, the automatics and figures out how many spots are available for bubble teams.

Selection Monday is a week away and some teams are running out of time to make their regional cases, left to spend the week scoreboard watching. Today we look at the safe teams, the automatic bids, the at-large contenders and determine the size of the bubble.

First off there are some teams that are very secure in their status. These would project as No. 1 and No. 2 seeds.


At the bottom of the field there are 13 automatic bids from one-bid leagues:

There are more conferences than usual that have the potential to supply an at-large team. Due to a scarcity of nonconference play, the committee will need to focus on the data points they do have; perhaps the most important of those being conference play. Teams that won their conferences, especially if they were dominant in doing so, have an increased opportunity this season.

There would not be room for all of these, but we list the potential at-large teams from these eight potential one-bid conferences should any of these teams fail to win their conference's automatic bid:

In addition, if anyone other than East Carolina wins the AAC automatic bid, hat would take away another spot. The WCC (Gonzaga), Big Ten (Nebraska), Big West (UC-Irvine) and Pac-12 (Arizona or Oregon) are awarding their automatic bid to the regular-season conference champion, as is the Mountain West. If anyone from outside the safe group wins the SEC, ACC, Big 12 or C-USA automatics, that also steals a bid.

The following teams would be considered on the bubble for at-large bids. Some of these are still in contention for automatic bids. We generously list 21 teams. Some of these bubble teams face a serious challenge to see their name called in the field of 64.

This does not yet include the eight teams listed above from potential one-bid leagues. As they lose their opportunity automatic bids, those previously mentioned conference champs could move to this group, replacing teams who falter this week.


As of today, the bubble size is 11. That's a really soft bubble, as we'd have room for 11 of these 21 teams. This number changes each day, usually downward. Using an estimated guess, I'd venture somewhere between five and nine of these teams will see their names in brackets on Monday.

Stay tuned for our daily stock reports and our regional predictions throughout tournament week.
Reactions: sklarbodds

Alum-Ni said:
First off there are some teams that are very secure in their status. These would project as No. 1 and No. 2 seeds.

I really like Mark Etheridge. Been reading him for years. He's a data guy and very good at it. But he would have to give me a really sound argument as to how Michigan belongs in the 'very secure status' list. They look very shaky to me.
Reactions: Alum-Ni

Wonder if anyone feels the same ---> I really don't care about being a 1 seed unless it's in Lincoln. If we deserve a 1 seed (and right now we do) then we deserve to host. Bring it to Lincoln.

New (COVID inspired) rules won't allow that so screw it. Send us anywhere at any seed and we'll just play our best and hope to win.
C

k9_r said:
I really like Mark Etheridge. Been reading him for years. He's a data guy and very good at it. But he would have to give me a really sound argument as to how Michigan belongs in the 'very secure status' list. They look very shaky to me.
Click to expand...

Maryland just won a series in Ann Arbor and they are tied for second. Maryland’s SOS is higher (probably mostly due due the inclusion of Nebraska in the calculation). I can’t find any reason to have Michigan in over Maryland other than based on previous years’ performance.
Reactions: k9_r
C

k9_r said:
Wonder if anyone feels the same ---> I really don't care about being a 1 seed unless it's in Lincoln. If we deserve a 1 seed (and right now we do) then we deserve to host. Bring it to Lincoln.

New (COVID inspired) rules won't allow that so screw it. Send us anywhere at any seed and we'll just play our best and hope to win.
Click to expand...

I agree with the second paragraph. And I would rather host as a #2 than go on the road as a #1.

I would, though, prefer to get a #1 seed. It brings into play the option of starting someone other than Povich in game 1 vs. some team from a one-bid league and saving him for the all-important game 2.
Last edited: May 24, 2021

k9_r said:
Wonder if anyone feels the same ---> I really don't care about being a 1 seed unless it's in Lincoln. If we deserve a 1 seed (and right now we do) then we deserve to host. Bring it to Lincoln.

New (COVID inspired) rules won't allow that so screw it. Send us anywhere at any seed and we'll just play our best and hope to win.
Click to expand...

I'd much rather not play another 1 seed, so I'm very much interested in a road 1-seed
You must log in or register to reply here.

Husker Baseball Board May 10, 2021
RobsterMobster

Husker Baseball Board May 5, 2021
RobsterMobster